The IRI, conventionally measured using lasers, will be back-calculated from a 3D accelerometer and gyroscope installed in the cars. Rutting depth, which appears as a permanent deformation on the wheel paths, will be quantified by the stress in the servo hydraulic system of the car. In fact, ruts on a pavement acts on the car as a rail affecting the torque stress while driving. Friction is modeled using Anti-lock Braking System (ABS) data and the effectiveness of the regenerative brake equipped in the electrical car.

Pressure and vibration sensor are going to be used to measure texture properties, cracked surface and potholes damages. Noise will be measured by a microphone while rolling resistance will be quantified by the measured energy consumption of the cars. The effect of drivers’ behavior on sensors’ response will be investigated during the calibration of the models. It is also expected that by having big amount of data the driver’s behavior should not be statistically significant. Machine learning will also provide further knowledge about the impact of the road properties on the other sensors installed in the cars.

Data will be collected by GreenMobility which operates in Copenhagen a car sharing service with 400 electric cars. The aspect which makes GreenMobility a key player is that their fleet is made by one model of car connected to both network and georeference system. 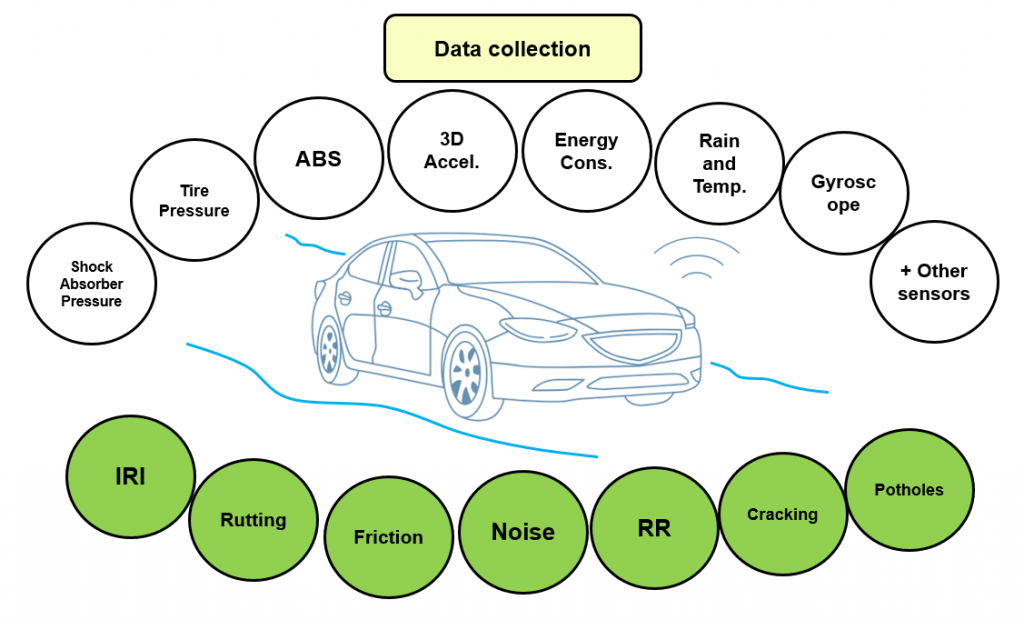 GreenMobility represents an ideal platform of data collection where potential biases due to differences in data source are minimized and controlled. Data will be processed using machine learning which offers nowadays a very efficient way to develop very complex models by studying and processing many variables and big amount of data. Municipality of Copenhagen is an optimal sand box from the infrastructure prospective because the overall road network under their jurisdiction includes a wide range of pavements quality and type. Motorways crossing the city are also relevant for the project and are controlled by Danish Road Directorate.

The developed platform will be applied on other cities where GreenMobility operates the same service and this will be validated by delivering road survey in the municipality of Oslo.

The project will be divided into four consecutive steps. The first is focused on designing and structuring a proper database. The platform used to collect the data, which is made by the cars fleet and servers, will be upgraded to be able to deliver and store high amount of data. All sensors installed in the cars will be recorded and not only those who are known to be physically significant.

Once the platform is ready, DRD and Copenhagen municipality will identify the road sections aiming at covering a wide range of pavement type and conditions. These roads will be scanned by standard vehicles to collect fundamental road measures and traveled by the GreenMobility fleet. Weather conditions, drivers’ behavior will also be investigated and all data will be stored and structured to be used in the next phase.

Hybrid Model will be developed in the second phase during which Machine learning and Physical model will be used in parallel. In fact, Machine Learning models can learn from experience and consequently from physics. By given enough examples of how a physical car system behaves in relation to specific road conditions, the ML model can learn this behavior and make accurate predictions. Some road sections will be used during models training while others for validation.

LiRA map will be released as final product. The user will be able to monitor the road condition by app or browser based software.

It is the ambition that the innovation in this project will lead to a revolution of state measurements of Danish roads. In addition, based on the new project, noise and CO2 emissions can be continuously analyzed, which can be used as input into maintenance strategies and contribute to socio-economic calculations, says Matteo Pettinari, specialist in the Road Directorate and project manager at LiRA.